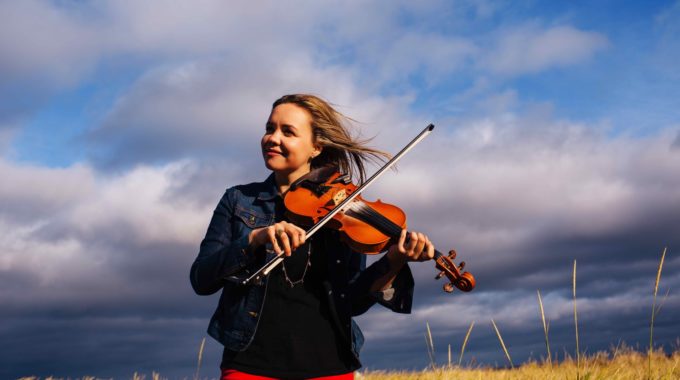 With a hard driving fiddle style and an infectiously joyful stage presence, Cape Breton fiddler Rachel Davis is quickly moving to the forefront of the traditional music scene in Atlantic Canada. Born and raised in Baddeck, Cape Breton, Rachel feels as comfortable on a festival or concert stage as she does in a dance hall back home. She has brought her music to venues around the world, including across Canada, the United States, England, Scotland, France, and Australia. First learning the fiddle from her grandfather, Clarence Long, she fondly recalls sitting in a corner of his barbershop, squeaking away at tunes under his careful guidance. Her musical roots run deep, which becomes very apparent from her obvious joy that she exudes on stage, and has earned her a reputation as one of the best Cape Breton style fiddlers on the go. She is also a member of the JUNO nominated and East Coast Music Award & Canadian Folk Music Award winning Celtic supergroup, Còig.

Rachel’s latest recording, entitled “Turns” (released in April 2013) sees a marked maturity in her playing since her debut album, and has earned her nominations for a Canadian Folk Music Award, Music Nova Scotia Award, and two nominations for East Coast Music Awards, including Rising Star Recording of the Year. It includes a wide variety of her musician friends coming along for the ride, including Canadian vocalists David Francey, Dave Gunning, and Carmel Mikol, and instrumentalists Tony Byrne, Mac Morin, and Darren McMullen. From driving reels to dreamy slow airs, Turns provides true variety for the listener. It also sees Rachel come to the forefront as an impressive vocalist, with four vocal tracks highlighting her interpretations of traditional and contemporary songs in both English and Gaelic. Described as “delicate and haunting” (Dan MacDonald, Cape Breton Post) and “spine-tingling” (Davie Gardner, Shetland Times), she is proving to be a force to be reckoned with both as a fiddler, and a singer.

Rachel’s debut album was released in 2009 at the age of 20, and proved that she was one to be watched as an up and coming artist. She was awarded the Frank “Big Sampy” Sampson Award from the Celtic Colours Festival Volunteer Drive’er Association to make the album, which included the powerful team of Tracey Dares-MacNeil and Buddy MacDonald accompanying her. Sticking to her traditional roots, she did not disappoint with an album full of driving jigs and reels, along with a haunting Gaelic vocal number, with many family members taking part. The album earned Rachel a Canadian Folk Music Award nomination for Young Performer of the Year, and she was featured on the cover of the Living Tradition magazine in 2010. It also received rave reviews from Penguin Eggs Magazine, the Living Tradition magazine, fRoots magazine, Rambles.net, and the Cape Breton Post.

As well as keeping busy with solo shows, Rachel has also collaborated with many musicians and singers, including Cape Breton singer/songwriter Buddy MacDonald. She has spent most of the last few years touring with the traditional Cape Breton supergroup Còig, alongside Darren McMullen, Chrissy Crowley, and Jason Roach. The group released their latest album, the JUNO nominated and ECMA winning "Rove", in June 2017.