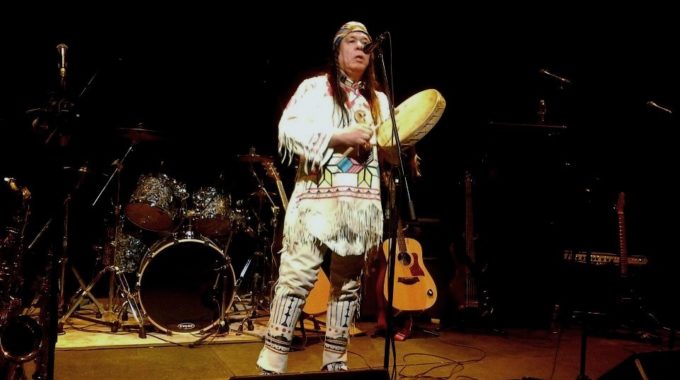 He was born on the Red Bank Indian Reservation along the Miramichi River in New Brunswick Canada. For the past 30 years, George has been involved with the Aboriginal Traditional Movement in reviving Mi’kmaq Songs, Chants and Ceremonies. George Paul is now very well known in the Atlantic Region, particularly in the field of Aboriginal Studies. He has been involved with stage production and several film documentaries which include Brookes Diamonds “DRUM” show. George is recognized for his outstanding public speaking abilities and has been appointed on several occasions to be a voice for his people on several aboriginal issues. He has collaborated with many schools, universities and government agencies in the development of Mi’kmaq Music, Language, Art and Dance.

George was instrumental in the revival of Traditional Gatherings in the Atlantic Region by organizing and hosting the first pow-wow in his community of Red Bank in 1981. In 1988 he was employed by the Native Council of P.E.I. where he was the Director of “Ankamsi” Transition House. His cultural education and awareness programming was a ground breaking contribution, and very significant in restoration of the pride and dignity of the First Nation’s People in P.E.I. In 1999, George had an opportunity to share his knowledge of sacred traditions of the Mi’kmaq, when he was elected President of Mother Earth Lodge II Inc. This facility, situated in Red Bank N.B. provided for everyone a chance to learn and participate in Spiritual Teachings, Music, Drumming, Chanting, and the Sweat Lodge Ceremonies which is the essence of Holistic Healing. It became a central point for all major community functions and established in its own rite, a tourist destination stop.

George has been recording songs since 1991; his first recording was titled "Traditional Mi’kmaq Chants". This album was recorded at Smith Sound, a small studio just outside of Charlottetown P.E.I. and was funded by the Secretary of State through Native Council of P.E.I. It was meant to be a teaching tool album, but has gained a lot of popularity especially at Pow-Wows, mainly due to his original songs the "Honor Song" and the "Gathering Song".

In 1993 he collaborated with other native musicians such as Donna and Jimmy Augustine, from the Big Cove reserve in New Brunswick, on a recording called "Traditional Voices from the Eastern Door", again this recording was initially designed to be a learning tool, with most of the written content provided by George Paul. Some of these original recordings were used again by Aboriginal Artists, namely, Eagle Feather and Morning Star. If you’ve seen the Walt Disney movie called "Squanto A Warriors Tale", then you would have heard samples of George Paul’s original Mi’kmaq chants, particularly at the opening with the wedding ceremony, and when Adam Beach who plays the leading role “Squanto” has to fight with the grizzly bear in the pit and another during the feast when Jimmy Augustine who acts as the medicine man sings George Paul’s “Gathering Chant.

His award winning album “Red Ochre” was recorded by Jean-Louis Paulin Studio from Petit Rocher, N.B. and was funded by the New Brunswick Arts Board in 1998. Jean Louis contributed his expertise in musical arrangement to this album, mixing Georges’ Mi’kmaq language with ancient rhythmic sounds. Gilbert Sewell and his daughters, Cynthia and Anna Mae, from Pabineau First Nations performed the backup vocals. The excellent cover design was done by Charles Theriault of Publik Art Inc. in Beresford, N.B.

"Red Ochre" is a combination of traditional and contemporary sound delivering a strong message of environmental and aboriginal issues. This Album has been generating a lot of attention with CBC and other radio stations, particularly First Nations owned radio stations across Canada.

The album Red Ochre, originally recorded in 1998 saw the development of its promotional stage presence in February 23rd 1999. At this time George enlisted the talents of local musicians. Kevin Arsenault, a guitar player from Chatham Miramichi, was George’s first band member. Mike Arsenault, a drummer was the next member to join the band. Shortly after, Alfred Tony from Shubenacadie N.S. became the band’s bass player. Six months later, Pete Christenson joined in as the lead guitarist. Finally, Chris Sonier added his harmonizing vocals to complete what would eventually become “The Red Ochre Band”.

This album, originally recorded by George and Jean-Louis Paulin now became a candidate for an East Coast Music Awards. It was submitted in the year 2000 for a 2001 Event hosted in Charlottetown P.E.I. and won best Aboriginal artist/group of the year.

One of his most proudest recording projects was done in the fall of 2003 self titled “The Spirit of Dreams” was Recorded in Chatham N.B. by Packin Shed Sound Studio and was Produced and financed by himself. Although His band is ever evolving to an increased talented group of musicians, the content remains the same. George’s ongoing recordings continue to please his audiences all around the world and are registered with SOCAN. The Arts Board of N.B. deserves honorable mention for funding of the “Red Ochre” album and support especially his most recent album titled “Ancient Sounds Return”

“The Spirit of Dreams” reflects the evolution of George’s diverse cultural musical influences from the seventies to the present day. Georges Dream is to see continued growth and expansion of traditional and contemporary arranged music to be played on stage, film and mainstream radio. He remains true to his traditional values and incorporates them with everything he does.