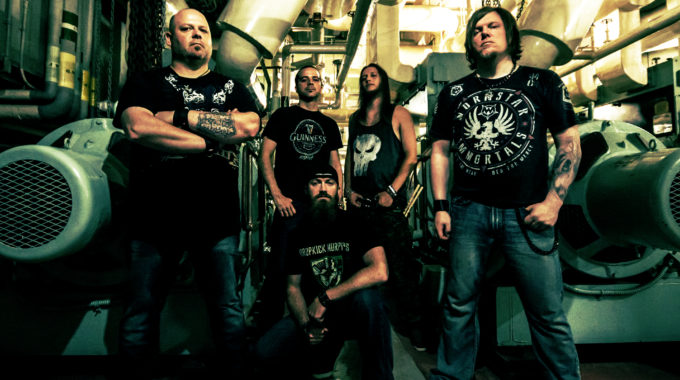 The music is in your face, but it has a soul, and it has a story. This modern heavy melodic rock or alternative metal band has crafted their sound using angst ridden vocals and edgy yet accessible riffs blurring the lines of specific genres. Song writing is the main focus of this band and it is also their biggest strength.

The band’s second album “We Are Disaster” (2015) is a shining follow up to their award winning self titled debut album. The band has embraced a more aggressive tone while still remaining true to their melodic beginnings. “We Are Disaster” is a third eye view into a world that lost touch with the best parts of the human element. It’s a worst case scenario; of what’s left behind when we’ve push each other to desperation. It’s a bit political, a bit social and a lot angry. Fittingly, the band’s press shots were taken at an actual nuclear bunker. Fans of heavier melodic hard rock like Sevendust, Godsmack, Disturbed and Finger Eleven, will definitely want to add Chaos Theory to their collections.

Chaos Theory’s live show is constantly evolving and is hard to ignore. The dynamic vocals, hard-hitting riffs, and technical drumming draw fans into their world. When you see Chaos Theory live, you not only see the show, but you become part of the energy. As one fan put it, "If you’re looking for a band to see – look no further. This is the band.”

THE BAND
The band is fronted by the multi talented Rock Johnson, and he and founding member Lex Coulstring (guitar/vocals), join cohorts Shaun Cowell (lead guitar), Shane Pardy (drums) and Tim Garagan (bass) to make up the band.

WHAT’S NEXT?
As if a new album, a new tour, new videos, and a new website weren’t enough, the intrinsic desire to improve every aspect of what Chaos Theory is will keep the band busy right through until 2016. Chaos Theory will tour Canada in support of “We Are Disaster” during the spring seasons, with plans to return to the studio during winter months. Along with new material for a third album the band was sights an acoustic EP and will rework bonus material from their debut album with their new line up.