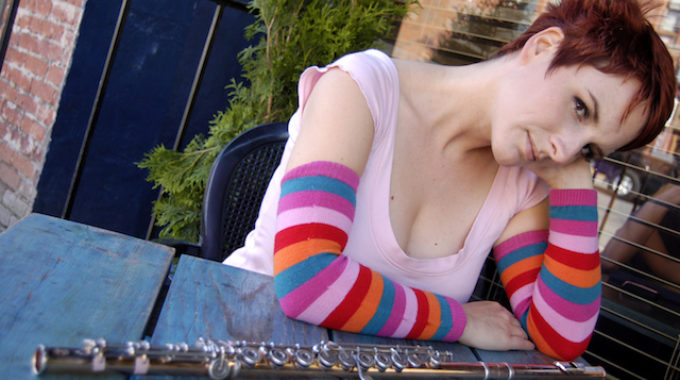 “It’s easy to fall for the eclectic sounds of this creative mastermind, and you will probably get lost in your imagination while falling.“ (Rock Eden Magazine)

International Touring Artist, Rozalind MacPhail (Canada) creates organic electronic music for live performance and film. She explores new ways to combine image and sound in works that speak honestly of people, place and the human experience. A classically-trained flutist, MacPhail layers effected flute loops, vocals, field recordings and electronics through Ableton Live. She takes audiences on an inspiring journey across Canada and beyond. One of the world's most buzzed-about Gemeinhardt artists, MacPhail took home an East Coast Music Award for Electronic Recording of the Year and was nominated for four MusicNL awards. She is currently touring her audio-visual project, DON’T LET ME FALL TOO FAR. Her newest collaborative audio-visual project, PUSH & PULL will be released in 2021.

Based in St. John’s, Newfoundland and Labrador, MacPhail is an active performer, film composer, session player and music educator.

MacPhail is the first-ever Canadian artist sponsored by the Gemeinhardt family, one of the music industry’s largest exclusive manufacturer of flutes and piccolos. Gemeinhardt President & CEO, David Pirtle says, ”Gemeinhardt is thrilled to sponsor the creative artistry of Canada’s looping flutist, Rozalind MacPhail. She is a dynamic and gifted performer who inspires through her lively audio-visual performances and interactive music workshops.”

MacPhail grew up in Canada on a small group of islands nestled in the harbour of Toronto, Ontario called Toronto Island. She has lived in many parts of Canada but it was the artistically vibrant city of St. John’s, Newfoundland that stole her heart.

Following years of classical music performance training at the Etobicoke School of the Arts,  University of Toronto and University of Ottawa, she has pursued her interest in a wide range of musical genres, while performing as guest flutist with other artists, including Yo La Tengo, Lou Barlow, Constantines, Great Lake Swimmers, Elliott Brood and Pick a Piper.

Rozalind seeks opportunities to create music for film, particularly through live performance synchronized to image. She looks forward to performing her original music worldwide, while connecting with audiences of all ages. As a music clinician, Rozalind has presented workshops in Canada and the United States in flute performance, live scoring for film, looping through Ableton Live and music career development.