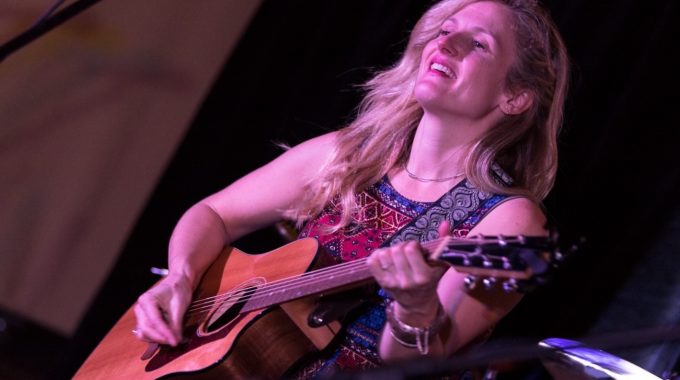 Sarah Pound is a Nova Scotian singer-songwriter who writes on both the piano and guitar. She began writing poetry as a young girl, songs as a teenager and now has dozens of originals to her name. She is passionate about singing, and it has been her focus for most of her life. From copious choir experience, to having vocal chord surgery at 18, to becoming an accredited music therapist, Sarah's experience and vocal abilities can be felt by her listeners. Sarah's style is eclectic and is described as soulful pop with touches of country, bluegrass, blues, gospel and R&B. Thus, the umbrella genre of Americana could likely best describe Sarah's unique sound.

Prior to COVID, Sarah was passionately working towards finishing a new collection of songs for an upcoming record, and similar to many other artists, the pandemic and a lightened performance schedule created space, time and reflection: a perfect combination for a songwriter to create. Her material is thoughtful and captivating, songs about life, love, loss and hope. They are undoubtedly songs from the heart, crafted carefully like a puzzle, musically interesting and catchy at the same time. Sarah’s latest song, “Nova Scotia Strong”, is having a positive impact on her community and beyond.

Her recent single (with co-writes Stephen Gaetz and John Ebata) is being received with open arms and ready hearts. Since being publicly released in August 2020, it is now on multiple MBS and Affiliate radio stations in both Nova Scotia and New Brunswick. Deep Roots Music Festival featured her new duo, Sarah Pound & John Ebata, in a virtual YouTube concert with “NS Strong” as an impactful online video montage featuring individual contributions from people of all ages. This can be found at www.youtube.com/watch?v=stfTe1hsBJ8. The duo also finished the Deep Roots Music Festival, Wolfville Waterfront Summer Series of 2020.

Back in the spring, they were asked to contribute to Eastlink TVs “Heartstrings” two-hour special, dedicated to Atlantic Canadian seniors, especially those living in long-term care. Then, they themselves produced their own hour-long special for Eastlink TV, called "Nova Scotia Reboots" that aired on August 1st. They paired ten of Sarah’s new originals with five speakers in the fields of motivation, music and mental health, and finished the show with “NS Strong”. It aired provincially, and then, nationally on October 7th.

They released the live album from the television show and have been showcasing it ever since, doing seven live concerts (following government COVID restrictions) from Kingsport to Kingston, NS, between August 15th and September 27th, 2020. Sarah’s other new songs on this record include “Hey”, “Worth Believing”, “Solace”, “Never too Late”, “Rise”, “Cassiopeia” and “Free as a Bird”.

Sarah & John will be featured at the Al Whittle Theatre in Wolfville on November 28th, and they are looking to the horizon for other opportunities to keep spreading their positive message of hope, leaning on one-another, and being each other’s “soft place to land” (another one of Sarah’s song titles). To hear this song online, go to the Sarah Pound & John Ebata Facebook page: https://www.facebook.com/114026660425627/videos/358380175481679

Sarah also performs in a five-piece country band, The Sundries, and a 15-piece dance-band, Bluesmobile.

Whether Sarah is performing by herself or with her various projects, you'll surely leave inspired!

For more information, please go to www.sarahpound.com or www.ascensopromotions.com to reach her management.