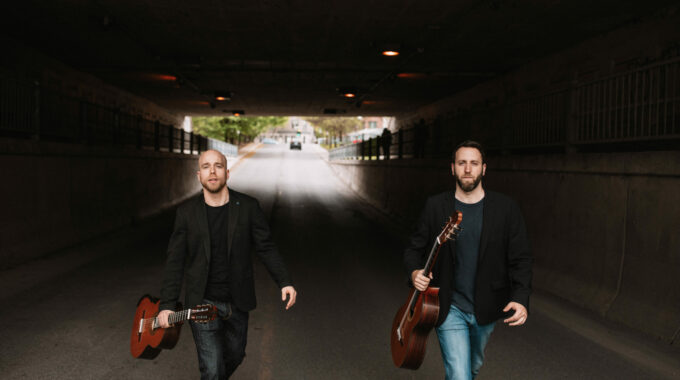 Steve Cowan and Adam Cicchillitti are both acclaimed and established guitarists, having performed both individually and together on concert stages across Canada and abroad. Their duo efforts date back to 2015, when what began as performing Spanish classics soon evolved into new Canadian commissions, electroacoustic experiments, and arrangements of 20th century French music. On their debut release, FOCUS, Tracy Anne Smith (American Record Guide) states that “with sensitive, authoritative, au courant playing, Adam Cicchillitti and Steve Cowan retain their individuality while communicating like old friends”.

Cowan and Cicchillitti toured Eastern Canada under the auspices of Debut Atlantic in 2018 and Prairie Debut in 2020-2021. At the inaugural 21st Century Guitar Conference in Ottawa, Steve and Adam commissioned and premiered 9 new electroacoustic works by the New York-based composer collective, ICEBERG New Music. In 2022, with the support of the Canada Council for the Arts, the duo will undertake their most ambitious project to date: to premiere and record six new commissions for two guitars and orchestra with Ottawa-based chamber ensemble 13 Strings.