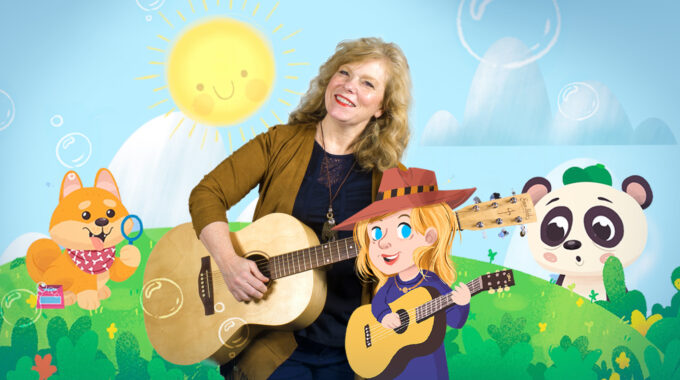 Sue McBride is a multi-instrumentalist, singer-songwriter from Halifax, Nova Scotia. As a graduate and vocal student of the Dalhousie University Music Department, she has dedicated her life equally to music, music education, and the advancement of learning & curricular skills in young children. She has several Masters degrees in education and has worked in various teaching roles as an elementary classroom teacher, music specialist, literacy & mathematics specialist, and expert in special education programming for over 30 years. She has a string of single releases, a debut EP release, and many popular children’s music videos on her YouTube channel (some exceeding 100,000 views).

Today Sue McBride is best known as an up-and-coming Nova Scotian recording artist & children’s entertainer who produces educational and entertaining content for children (ages 0-9) that adults love too! Sue’s children’s performances and recordings are comprised mainly of original compositions, but she has found a strong niche in re-arranging and re-introducing traditional Canadian/Nova Scotian children’s songs with a modern spin. Her re-imagining of Nova Scotia gems she grew up with and taught in the Nova Scotia public school system has been applauded by Nova Scotia music archivists and educators alike.

HER MISSION AND CHILDREN’S MUSIC:

Sue McBride’s music for kids is so much more than just entertainment! Although it certainly fulfills that role, her musical creations for kids ages 0-9 encourage knowledge and academic skill development. The music itself helps to develop musical skills such as keeping a beat, performing basic rhythm patterns, and singing harmonies. Lyrically, her children’s songs teach academic concepts. Susan’s tunes are the catchy, unforgettable “earworm” type that makes learning stick!

Sue’s dream and mission in life for becoming a children’s recording artist and entertainer, following a successful teaching career, was to continue to inspire and develop young minds through music using the power of music-integrated learning. Using her knowledge of children’s learning, she has been producing downloadable, printable, educational materials such as Beginning-Reader mini-books, art, and drama activities for all of her children’s single releases. Her plans for expanding her brand of musical and kids educational creations into a series of commercially available music-integrated learning products is well on its way.

Although she has a string of well-received singles behind her, Sue has recently released her debut children’s EP, “SHINE”, a delightful collection of mainly original, high-quality, arranged, and recorded kids songs. It is not so much that they make learning fun, the songs are so deftly crafted and joyful, that children don’t even realize that they are learning as they engage with the catchy melodies, lyrics, and rhythm inherent in each of the songs. There are 6 tracks on Sue McBride’s debut Children’s album “SHINE”

Sue McBride's original folk music and children's music has been praised for it's creativity and innovation in the music industry. She is a featured performer on folk and children's radio stations and podcasts worldwide and has been steadily gaining a global fan base.