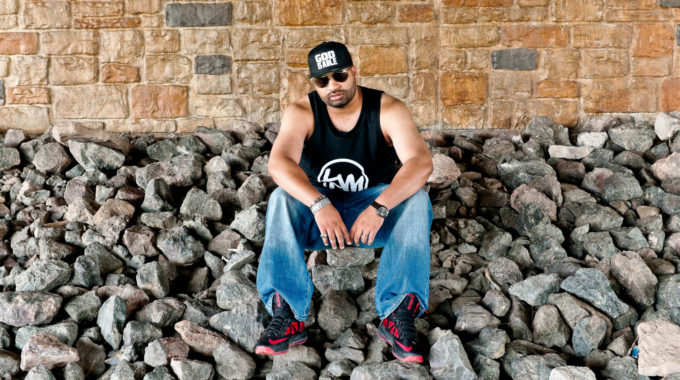 One8Tea was born with music flowing in his heart. Influenced by a musical family, his grandmother toured Nova Scotia singing Acapella gospel music and an award winning uncle Michael, who went on to perform only gospel music. Born Teah Bailey in the city of Halifax, Nova Scotia, he hit the Hip-Hop music scene seriously in 1995, seeing success almost immediately, quickly taking the East Coast club & university scene by storm. Touring the East Coast and “chasing the dream” quickly became a personal nightmare...as a heavy addiction to drugs and a partying lifestyle took control and he began to lose everything including his family.

During this time a friend planted the seeds of Gospel in Teah’s life. After attending church and accepting the gift of salvation, a relationship with Jesus began. Responding to the gospel and repenting for his sin filled lifestyle, Teah changed his name to One8Tea, to represent the U-Turn in his life to turn away from his sins and pursue God.

He entered into the amazing faith-based life-changing rehab program at “Teen Challenge” (www.tcatlantic.ca) during a 12 month program he was equipped not only with the tools to overcome addictions, but, the knowledge and strengthened relationship with Jesus.

After graduation One8Tea wanted to reach others, show them a better life, share the love of Jesus and spread the life altering message of hope and salvation he had experienced. He dedicated his God given talents to this mission, releasing “The Chronicles Mixtape” and following it up with “Under Construction”. 2013 saw another amazing full length project in “Called Out” featuring production by multi-award winning, and 2x Grammy Nominee, Fresh IE!

One8Tea had the amazing opportunity to join the Winnipeg based Christian Hip-Hop label “Kingdom Music Family” and released his debut album “U-Turn” which was nominated for a 2014 Covenant Award. He was also part of "The Watchmen" group album by KMF which won Rap Album of The Year award with the Gospel Music Association. He then followed up with "Out of Anguish" which was nominated for Rap Album of The Year at the Covenant Awards in 2015. 2016 has seen the release of "Reverence" which One8tTea describes as his best and most meaningful project of his career winning Rap Album of the Year at the 2017 GMA's and being nominated for Gospel Recording of the Year at the 2017 ECMA's. Touring the country One8Tea has shared the stage with Fresh IE, Paul Brandt, Chelsea Amber, Informants, Sky Terminal, Jon Neufeld of Starfield, Fraser Campbell, Newsboys, Kutless and was featured on Fresh IE’s GMA award winning “Red Letterz13” and "Collide" albums, shook the stage at Canada’s Largest Christian Music Festival East To West in 2014 and has toured across Canada three times since 2014.

In all these highlights the most important is watching lost people get found, seeing over 2000 people come to a new relationship with Jesus. Seeing youth and elders worshiping and pouring out at the altars over the years beats all the lights, stages and performances.

One8Tea currently resides in Moncton NB with his amazing & supportive wife, and family. It is his mission to reach the lost and see people come to a new & deeper relationship with Jesus, because, “Found People, Find People”