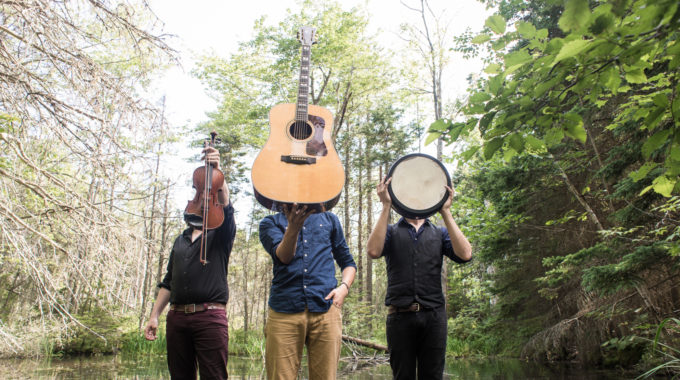 Ten Strings And A Goat Skin

Ten Strings And A Goat Skin - 03 The Night They Moved The House
http://www.youtube.com/watch?v=X4kR70jFG_8
BUY MUSIC

Hailed on two continents as” infectious” and “the best of contemporary/traditional Celtic music” Ten Strings And A Goat Skin is a bilingual trad/world/folk/fusion trio, playing Irish, Acadian, French and original creations infused with modern and world rhythms. The band creates a fiery, contagious and unique sound which leaves audiences wanting more.

Described as a “A seamless, polished, barrel-drum-tight, rhythmically innovative and wildly entertaining traditional music powerhouse” (The Guardian) Ten Strings And A Goat Skin, with members aged 20 and 22 years, continued to make waves both in North America and overseas in 2016. Recent winners at the East Coast Music Association Annual awards conference, they received the 2015 ECMA award for World Music and have garnered numerous awards and nominations including several Canadian Folk Music Award nominations. Following their debut appearance at the 2015 North American Folk Alliance in Kansas City, the group was singled out by the Kansas City Daily Star as one of the top 10 acts appearing at the conference along with Bela Fleck, Abigail Washburn and the Milk Carton Kids.

Throughout 2015 & 2016, the group and their music was embraced by audiences throughout North America and Europe including the UK, France, Switzerland, Belgium, and Denmark. TSAAGS was noted as having top album sales at the Shrewsbury Folk Festival, the 2nd largest folk festival in the UK which features the best in folk music from around the world. Their 2016 schedule saw their return to the world famous festivals like Shrewsbury – UK, the Milwaukee Irish Fest – US, and Tønder Festival – Denmark.

The bilingual trio, continue to be featured on radio and television in both French and English with notable recent features on television productions Balade a Toronto , Radio Canada, CBS, CBC , East Link TV5 (France) and PBS. In addition the groups’ music has recently been hailed by Canada Council of the Arts, the preeminent Canadian National arts organization, as representative of the best of World Music in Canada in 2015. Their music appears in a recent compilation CD through Canada Council and Songlines Magazine, with 20,000 copies having been distributed worldwide. In addition Ten Strings And A Goat Skins album, “Corbeau”, recently charted at number 6 on Billboards top 10 World Music sales for January, 2016.

With both French and English audiences, be it with the indie music crowd or the pure traditionalist’s, band members easily connect and notably, their fan base carries no age barrier. A performance review by Marque Wire Magazine, WI, at Summerfest Milwaukee ( hailed as the biggest music festival in the world) said that “While groups like Bruno Mars and Motley Crue were amazing, other smaller acts like Ten Strings And A Goat Skin (“a gem”) were every bit as good.”

Band members Jesse Periard, Rowen Gallant and Caleb Gallant highly respect the traditions of the music they play but are riding the wave that is redefining the roots of that music. Their original material maintains solid traditional elements but explores rich world flavours and textures. The results have been described as “intoxicating” and “refreshing” prompting a programmer for a major US festival to state “I don’t like Trad but I love this!” They were subsequently given a main stage billing at his festival.

All three members are proudly Canadian but their roots are twisty. Rowen and Caleb, natives of Prince Edward Island on Canada’s eastern coastline, come from Acadian, Irish, Scottish, and English heritage. They were fortunate to grow up at time of French/Acadian cultural and linguistic resurgence within the province. Jesse grew up on Prince Edward Island but was born in Canada’s only remaining French province, Quebec, and so grew up in a bilingual home. All were graduates from French First Language schools and do believe their cultural backgrounds and influences help them appeal to a wider range of music lovers.

From humble beginnings came the music of Ten Strings And A Goat Skin with a first performance at a community fundraiser held to aid in the painting of the local parish church in Rustico, PEI. Not having a band name to introduce the boys few sets, a family friend took stock of the instruments and suggested the name that has served them well ever since.

Recent touring in the US, Canada and overseas continues to see tremendous response with call backs from many venues. Examples of comments are humbling. MacIntyre Theatre in Washington State calls the group, “Just brilliant! Fresh, honest music from the heart – TSAAGS is not to be missed!” Imperial Theatre in Saint John, NB. notes , “These three young lads from PEI are already making waves as they embrace “trad” in a way that is so cool you just know they are going places.” Again, the Cape Cod Times in posted, “The trio, from Prince Edward Island… had the audience clapping, stamping their feet and ultimately rising to a standing ovation. It’s a group to keep your eye (and ears) on”. Shrewsbury Folk Festival noted that there are a lot of great musicians but, “What distinguishes the best from the rest is the ability to connect with the audience and that Ten Strings, in addition to being great musicians, has that nailed.”

Most recently Brian O’Donovan considered the godfather of Celtic Music in North America for his nationally syndicated North American show Celtic Sojourn had this to say:

” Probably one of the most exciting and progressive new roots groups to come through the Burren in some time … and they are just kids. The future for these boys is huge and the blending of music from Celtic and Acadian traditions is such a natural and with this trio, successful mix. Traditional music – roots and branches – on both sides of the Atlantic, is in very good hands.! ”