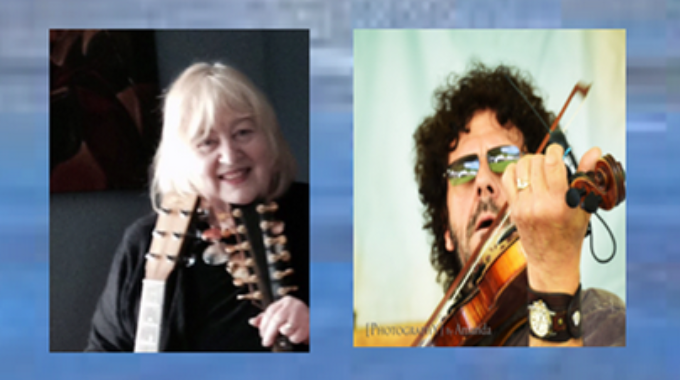 Cheerfully upbeat, with interesting and sensitive arrangements, these accomplished musicians have a love of traditional music, a respect for the cultures from whence it came, and a keen appreciation of how a few modern musical influences, used with discretion, can enhance rather than swamp the true emotions of the tunes. Superb musicianship, wonderful tunes and a happy atmosphere are guaranteed. Atlantic Bridge maintains the integrity of the traditional tunes with all the passion and exhilaration that was intended when they were composed. Much of the music is centuries old, other pieces are self-penned, or composed by some of the finest contemporary Celtic musicians. Atlantic Bridge was formed in England in 1996 by New Brunswicker Terry Arsenault and English musician Penny Phenix, sometimes as a duo, sometimes as a trio with an uillean piper, and sometimes as a five-piece band with drums, bass and a vocalist. Highlights of their UK career included touring a number of large venues with renowned Cape Breton fiddler, Jerry Holland, several high-profile festival appearances, and an Easter event in 13th-century Salisbury Cathedral, playing a Celtic-influenced suite composed for them by opera singer and pianist Simon McEnery, backed by a full orchestra and choir. Alongside all of this, the band was kept busy playing pubs, arts centres, country shows, parties, weddings…and even a funeral. In 2006, Terry and Penny relocated to France for three years, where they played to enthusiastic audiences at concerts, festivals, restaurants and bars throughout the country.

Based in New Brunswick since 2009, they continue to attract a loyal following. Venues have included the New Brunswick Highland Games, Dolan's Pub, The Tipsy Muse Café, the Affirmation Lounge, York County Cider, and the James Joyce Pub in Fredericton; Tartan Day, the Miramichi Folksong Festival, O’Donaghue’s, and Caper’s Pub and Eatery in Miramichi; the Creek Village Gallery and Café, the River Restaurant and various events in Woodstock; A.C. Sharkey's Pub and the Bath Meeting House in Florenceville-Bristol; the Moncton Highland Games; Scottish Festival, Perth Andover Gathering of the Scots; the Barnone Brewery in Rose Valley on Prince Edward Island; and in Nova Scotia at the Sidney Street Pub in Digby and the Beggar’s Banquet in Louisbourg.

Atlantic Bridge can also play for traditional British-style barndances, with a caller to guide the dancers through the fun, easy moves.