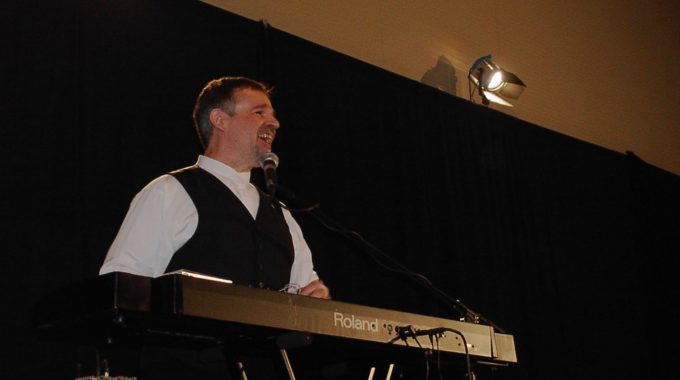 Singer/Songwriter Motivational Speaker Paralympian Composer of “A Pittance of Time”

Terry Kelly’s enthusiasm for life and sheer determination have gained him international recognition as an accomplished athlete; an award-winning singer, songwriter, and entertainer; a professional speaker; and a lover of life.

As a musician this Newfoundland native has released seven full-length recordings, resulting in seven East Coast Music Awards and nominations for four Canadian Country Music Awards and a JUNO. Terry has shared the stage with Symphony Orchestras, and has performed his original music in Europe, Australia, New Zealand, and for the troops in Afghanistan. He is most recognized for his inspirational song, “A Pittance of Time”.

Terry is a recipient of the King Clancy Award, and Honorary Doctorates in Civil Laws and in Fine Arts. He has received the Canadian Country Music Association’s Humanitarian Award and is a member of the Order of Canada.

In the athletic field, Terry has distinguished himself as the third blind person in the world to run the mile in under five minutes.

Terry Kelly is a storyteller who finds it natural to tell his stories through songs. His songwriting is the artistic discipline for which he will be remembered and honoured as time passes. Terry’s songs are crafted with the utmost care. His use of language, melody and imagery is skillful and the elements come together in a way that leaves a lasting impression. He is not afraid to use emotion to make his point, but manages to accomplish that without a sense of undue sentimentality. His melodies are not only memorable and very sing-able, but will undoubtedly stand the test of time. His highly developed skills as a vocalist and an instrumentalist place him in a very special category. Fellow musicians and songwriters always pursue opportunities to perform with Terry because he adds so much to any performance and can play with anyone. His joy for life and his sense of humour shine through his work in a way that is rare and very special.

The role of the artist in society is to force us to look in the mirror or to reflect what is happening in the world. Terry has always done that with his songs. His contribution to cultural life is special in that he has crafted and performed songs that make us think about many aspects of society. He has written a song to celebrate the Canadian Navy, a song honouring veterans and their families, songs about abilities and literacy, songs to raise awareness about cancer and poverty and many songs about home and family. His art has enriched our lives here at home and has represented us in a positive way across the country and around the world. His strong sense of social responsibility comes though in all his work and ultimately reflects Atlantic Canada as a warm and caring society and a wonderful place to live.

Terry Kelly’s artistic achievements are many and varied. They range from awards via his peers such as his seven ECMA’s to unique special projects that were commissioned to celebrate events or draw attention to issues in society. In addition to his six solo full-length recordings, he has appeared as a guest on numerous others. His honourary degrees, Order of Canada induction and the Queen’s Silver and Diamond Jubilee Medals were attained for “outstanding achievement and public service”. These achievements are important because they recognize that Terry has excelled in his artistic discipline and represented his country and his province at the highest level.

More about Terry’s Special projects can be found at
www.Terry-Kelly.com/projects.htm