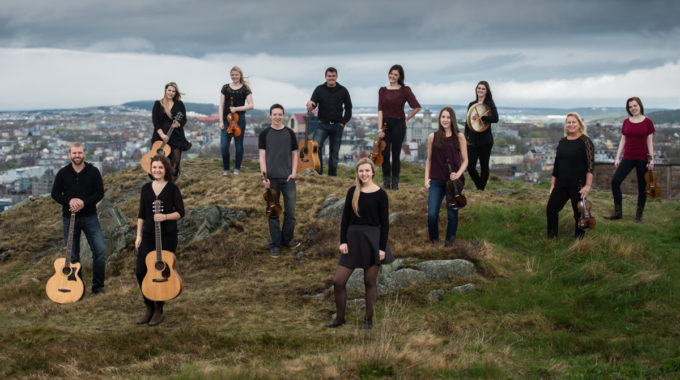 The Celtic Fiddlers from St. John’s, Newfoundland, Canada, are a vibrant group of 13 young professional musicians, ages 14-24. This unique group of fiddlers is accompanied by piano, mandolin, mandola, tin whistle, Irish flute, bodhran, cajone, accordion, banjo, bouzouki, bass, voice, guitar and drums. They have gained an outstanding reputation for their eclectic style and presentation. Collectively the group has mastered 53 instruments!

The Celtic Fiddlers recently returned from a tour of New York and were inspired by the great audiences at the Canadaian Consulate, The Frying Pan, New Rochelle, and Ellis Island.

Under the direction of Korona Brophy, musician, arranger and teacher, the Celtic Fiddlers, formed in 1993, performed at a wide milieu of international, national and provincial conventions and festivals, local folk festivals and events, celebrations and weddings. In August, 2012, the Fiddlers travelled to Ireland for a performance tour with the Festival of the Sea. They were invited to festivals in Cork, Dungarven, Carrick-On-Suir, and Waterford. Additional tours in Ireland were in 1999, 2003 and 2008, to launch their CD’s, “Passage” – a compilation CD of song, story and music of the Irish migration to Newfoundland; “The Sea in Our Eyes”- an instrumental collection of Newfoundland ballads, jigs and original works; and ‘the Celtic Fiddlers …a time for Christmas’ - a beautiful collection of Christmas vocals and instrumental music. Their fourth CD, “Salt of the Earth”, a tribute to Robyn Marie Peddle,( deceased member 1989-2009), was released in November, 2009. Their fifth cd “Times and Tides” was released in June, 2013. This 20 track cd celebrates our 20th anniversary and contains original and traditional vocal and instrumental pieces.

The Celtic Fiddlers & Co. is a not-for-profit organization that relies on grants and CD production/sales as well as honoraria from performances to assist in travel and further CD production.