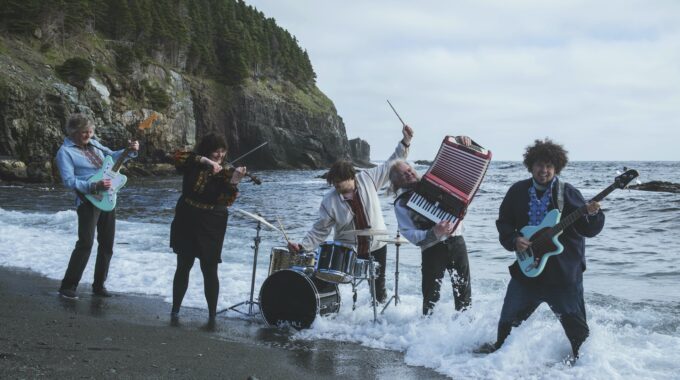 Kubasonics are arguably Newfoundland's finest Ukrainian band. This award winning group combines top-flight musicianship spiced with quirky humour, a dizzying array of exotic traditional instruments, and an eclectic high-energy stage show. Their unique brand of mile a minute speed-folk is balanced with haunting ancient melodies and heart-warming stories that offer a window into a unique and vibrant culture. With splashes of traditional Newfoundland tunes as an important part of their hybrid musical mix, a Kubasonics show is an experience not soon to be forgotten.

Kubasonics’ most recent album “Kubasongs” was released in March 2022 on the Urban Garlic label. Prepared during the pandemic, and released against the backdrop of war, the album joyously confirms that Ukrainian culture is indeed alive and evolving. It features 10 tracks of the Kubasonics’ distinctive brand of speed-folk. Drawing from a variety of Ukrainian music traditions, the band re-shapes each piece into a refreshingly new sonic experience. The result is a Zappa-esque blending of elements from a variety of musical genres, often incorporating traditional Newfoundland fiddle tunes. Three of the tracks feature collaborations with prominent musicians from Ukraine and from Trinidad. Produced by Romesh Thavanathan (formerly of Hey! Rosetta), the album’s unique artwork, created by award-winning designer Jud Haynes, reflects the Eastern European tradition of “vytynanka’ (paper cut art).