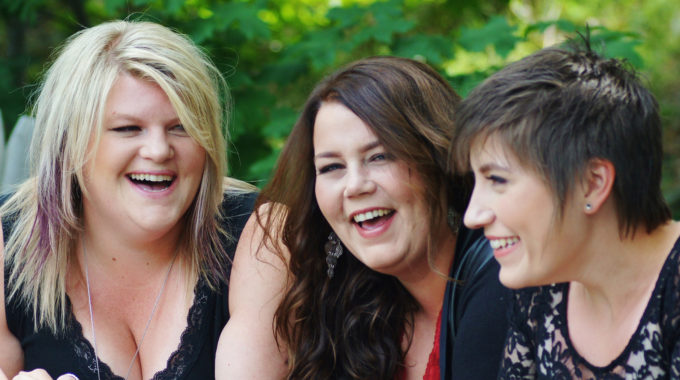 Kicking off the New Year in fine style – receiving an East Coast Music Award nomination for Country Recording of the Year for their debut CD Break Even! The Secrets were already stoked to be performing at the January 28th ECMA press conference where this year's award nominations were announced, and even more so when they learned that Break Even received the nomination for 2015 ECMA Country Recording of the Year.

Country-folk trio The Secrets – comprised of Newfoundland natives Karla Pilgrim, Terri Lynn Eddy and Renée Batten, all three accomplished singers and solo musicians – met in college while studying performance and recording at College of the North Atlantic. They quickly discovered a natural blend to their voices and musical aspirations, traded jigs and reels for whiskey, mandolins and faded jeans, and haven't looked back since.

The Secrets launched their trio in Newfoundland, opening for country music legend Alan Jackson's Freight Line Tour in 2010, and since 2012 have been taking their music across the country with stops at a number of prestigious festivals and events including Saskatchewan's Ness Creek Folk Festival, Winnipeg Folk Festival and the Stan Rogers International Folk Festival, among others. This experience enriched their outstanding vocal chops, helped hone arrangements of their original compositions and furthered their love of country music.

The Secrets headed to Nashville in spring 2014 to record with producer/co-writer, Peter Daniel Newman at the helm. This culminated in the (June 2014) release of The Secrets highly anticipated debut album, Break Even, followed by a summer tour which included main stage performances at the World Pride Festival in Toronto, the Acoustic Maritime Music Festival and Harmony Bazaar Festival of Women and Song in Nova Scotia, the Riverview Band Shell Series in New Brunswick, a coveted spot at the Cavendish Beach Music Festival (Atlantic Canada's largest country festival) held in PEI, an opening set for Serena Ryder at Newfoundland's infamous George Street Festival, and capped off with the ultimate dream gig – opening three sold out shows for country superstar Tim McGraw at Mile One Centre in St. John's, NL.

In October The Secrets celebrated from a distance as they took home 2014 MusicNL Award for Country Recording of the Year for Break Even while in the midst of wowing the fans on a jam-packed 10-stop fall tour through Alberta and Saskatchewan.

Citing influences such as Dolly Parton, Tammy Wynette and Linda Ronstadt (aka The Trio), as well as Johnny Cash, Tricia Yearwood, Terri Clarke and Patty Loveless, to name just a few, The Secrets built their repertoire on a foundation of classic country hits infused with an impressive, and ever-growing catalogue of country-folk originals. With their gift of voice and seemingly effortless, natural harmony coupled with their individual talent and skill as musicians – Karla on guitar and bass, Terri Lynn on guitar, mandolin and harmonica, and Renée, an extraordinary musical talent on guitar, accordion, fiddle, mandolin, bass and more – The Secrets fresh delivery of their chosen work is authentic, exciting and thoroughly entertaining for all who see and hear them.