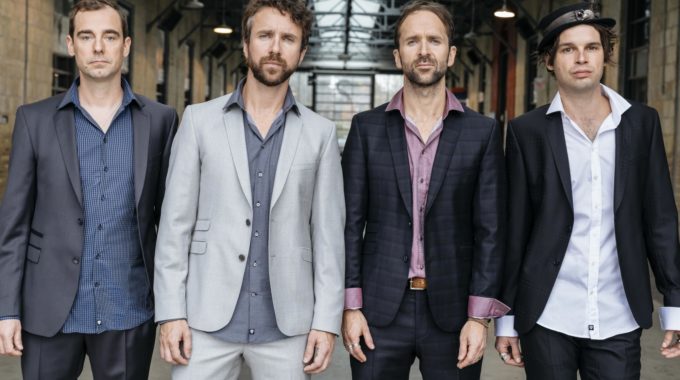 You don’t have to be a physics nerd to know that old chestnut about bodies in motion staying in motion is absolutely true. Just look at East Coast-bred, Toronto-based rockers The Trews who, since the April 2014 release of their universally acclaimed self-titled fifth studio album, have scarcely stopped to take a breath.

For proof, a quick tally of some recent achievements in the following categories…

Thrills! The band performed ‘Taking Care of Business’ alongside Randy Bachman at the recent SOCAN Awards in Toronto where the legendary Guess Who/BTO guitarist and songwriter scored a Lifetime Achievement Award. The MacDonald brothers and Big Sugar also nailed ‘American Woman’ as Bachman looked on.

Singles! ‘Under The Sun’ - one of several songs on album The Trews cut with fans in-studio as a reward for their support - is currently tearing up charts nationwide, following in the footsteps of previous TOP 10 Rock singles, ‘What's Fair is Fair,’ ‘Rise in the Wake’ and ‘New King.’

Amid all that glorious momentum, there has been a significant change. Original drummer Sean Dalton left the band after 14 years. Skinsman Gavin Maguire stepped in to brandish the beat at the suggestion of long-time Trews touring keyboardist Jeff Heisholt.

Canadian fans can witness that for themselves this summer as The Trews perform coast to coast, hitting multiple prestigious festivals along the way. Following an winter break, the band joins Gavin DeGraw, Sister Hazel, Will Hoge, Michael Franti & Spearhead and Red Wanting Blue aboard Rock Boat 2016, cruising the Caribbean (and scorching the rock faithful) from January 26 to 31.

Smart money says the newly revamped and re-energized Trews will – in typical Trews workhorse fashion - use any available downtime to contemplate their next album. “Who knows what’s next?” laughs John-Angus MacDonald.

“We certainly have options… maybe issuing previously unreleased material. And we’ve got to write a bunch of new songs. There’s lots to do between now and the end of the year. But we’re ready.”