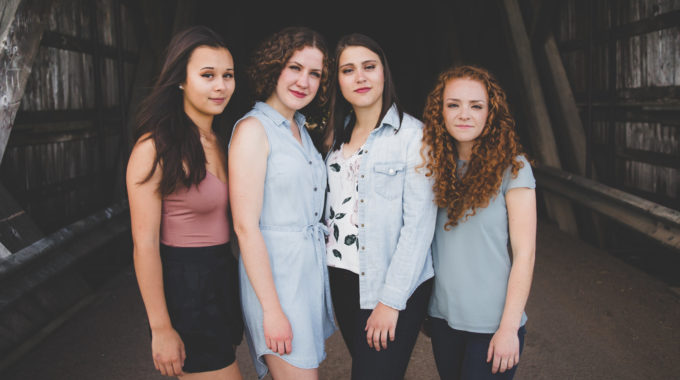 Since 2014 they have represented their genre and The New Brunswick Old Time Fiddle Company, under the direction of Stacey Read. Having toured Northern Ireland,The HebCelt Festival in Scotland, Schots and Zilleghem Folk Festivals in Belgium and in June 2019 The National Celtic Festival of Australia; they’ve also appeared closer to home at The Stan Rogers Folk Festival, Winnipeg Folk Festival, Lunenburg Folk Festival and Festival of Small Halls.

Showing their technical strokes; the show is a presentation of beloved tunes, discovered melodies, flying bows and feet; and tender sweet waltzes, harkening back to another time.

“Bringing a freshness to our programme, this quartet made a big impression on the festival and all they met. It is so refreshing to work with genuinely lovely people and their warmth shone through on stage, where they charmed our International audience.”

Preserving and promoting “Old Time’ Fiddle, celebrating New Brunswick composers and performers of this vintage style which was once so prominent across the province, their debut album was released May 2019.

In rural southern New Brunswick, Canada, the covered bridges and hay barns are vanishing. There was a time, when bridges were needed to keep the snow off roads or provide a safe place to stop on your journey. The hay barns dotted fields, marking the home of dry clean feed, for an agricultural way of life. After a day or a season of hard labour, families gathered in dance halls and barns as community, to literally kick up their heels.

At the centre of it all was the fiddler.

Fiddlers were integral if not essential to a community. Marking weddings, funerals, celebrations and commemorations across New Brunswick, they also gathered the dancers.

Fiddles are small, you can still carry them on a flight and store in an overhead. You can smuggle them into a maple sugaring or lumber camp. You can also board a ship from the old world, with your family and a fiddle; many did between the 1600 - 1800s before arriving in New Brunswick.

Old Time Fiddle music was created for dancing. It was the blend of the styles of music from immigrants to Eastern Canada; French, English, Scottish, Irish who each contributed their piece of culture to the fiddle tunes, we define as Old Time Canadian Fiddling. It was usually fast.

Don Messer (from Tweedside, New Brunswick), popularized the genre on CBC Radio in 1944 and started on CBC TV in 1956. As the most celebrated performer in the genre; he is still heralded as the God Father of ‘Old Time’.

Not solely Celtic, Francophone or Indigenous; it now it represents all cultures that chose to stay and build their lives in New Brunswick.