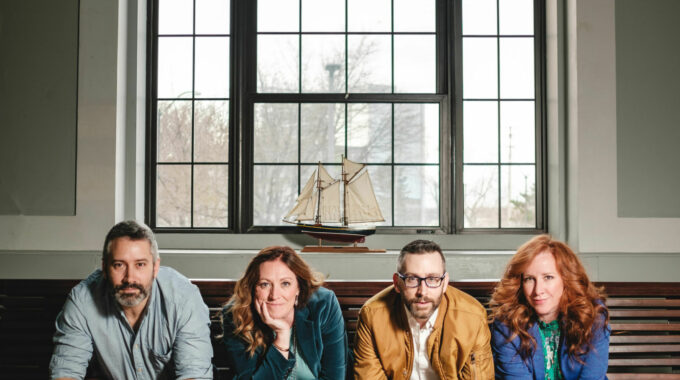 More than 20 years ago six dynamic solo performers came together to jam at a late-night session during the Celtic Colours International Music Festival… this session was the spark that lit Beòlach.

During the next decade, Beòlach continued to grow artistically through their innovative and exciting arrangements of traditional Cape Breton, Scottish and Irish tunes for fiddle, bagpipes, piano and guitar. The energy they present on stage demonstrates their knowledge of and passion for the traditional music of Ireland, Scotland and Cape Breton. The natural, easy wit and banter they exchange on stage reflects lifelong friendships, a shared sense of fun and years of experience as professional musicians. The band has delighted audiences throughout the world with their original compositions and unique arrangements of traditional tunes and their ability to light the stage on fire with their energy and witty stories. Their versatility as instructors has provides opportunity for learners to gain knowledge of traditional music and dance as well as insight into the relationship between these traditions that makes this style of music unique.

Beòlach has recorded two albums: Beòlach (2001) and Variations (2004), each of which gained critical acclaim and earned nominations for East Coast Music Awards. In 2005 the group was nominated for a Canadian Folk Music Award as Best Instrumental Artist.

Throughout their history as Beòlach, the original members which include Wendy MacIsaac (fiddle, piano, stepdance), Mac Morin (piano, stepdance, accordion) and Màiri Rankin (fiddle, stepdance) have maintained solo careers as musicians and collaborated with some of the most renowned artists on the traditional music scene, recorded about a half dozen albums between them and collected awards such as East Coast Music Awards, a Nova Scotia Music Award, and a Canadian Folk Music Award. The demands of their successful solo careers as well as the realities of life and family put Beòlach on hiatus. In the last two years, Beòlach has sparked again from hot embers with the core members Wendy, Mac and Màiri welcoming Matt MacIsaac (bagpipes, whistles, guitar) and re-forming the group as a quartet. Matt brings an extensive repertoire of bagpipe music, experience as a professional touring musician and the belief that he was born to play the bagpipes. He has won top honours at world piping competitions and cites influences such as his three uncles and the MacDonald brothers of Glenuig, Scotland on his modern traditionalist style of piping.