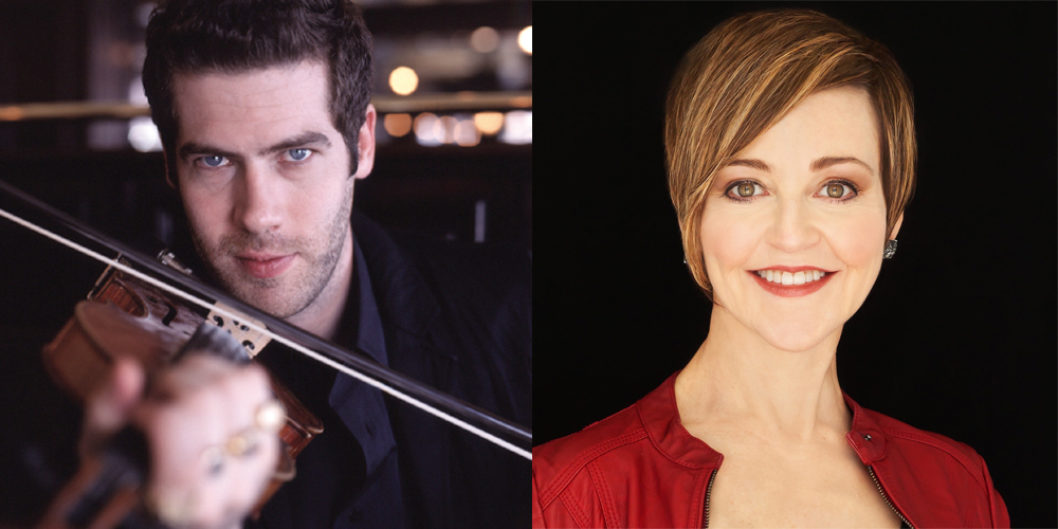 The East Coast Music Association (ECMA) is excited to announce Ashley MacIsaac and Heather Rankin as hosts for the 2016 East Coast Music Awards Gala, taking place on Thursday, April 14 at Centre 200 in Sydney, NS. The Gala will once again be broadcast live on Eastlink TV.

Ashley MacIsaac is one of the most celebrated Canadian roots musicians of all time selling over 500,000 albums since his 1995 double-platinum, genre-bending breakthrough Hi, How Are You Today?. Garnering worldwide acclaim by playing the fiddle in the hard-nosed, traditional Cape-Breton style while adding his own contemporary spin to Celtic music, the international success of the album’s single “Sleepy Maggie” made MacIsaac an instant Canadian icon. Whether with his new project FIDLR or with his more traditional work, Ashley MacIsaac continues to surprise crowds as a performer, writer, and singer.

“It’s about time! What a blast it’s going to be hosting live from Cape Breton Island,” says MacIsaac of the hosting opportunity. “The ECMA has helped me profoundly and is a constant thread to a career that began at their events over 20 years ago. I’m indeed honoured to host alongside an important artist such as Heather Rankin - a giant in a gem’s figure.”

Heather Rankin is known for her recordings and performances with the musical group, The Rankin Family. The family band known for their unique blend of traditional Celtic and contemporary folk music earned six JUNO Awards, three Canadian Country Music Awards, and 15 East Coast Music Awards. In 2012 Rankin began work on her debut solo album, forming a writing partnership with David Tyson (co-writer/producer of “Black Velvet” by Alannah Myles and “Dark Horse” by Amanda Marshall). The record, titled A Fine Line, is due out in February 2016 via Maple Music Recordings. Aside from her musical successes, Heather Rankin is also an accomplished actor. Her stage credits include roles in productions with Neptune Theatre, Chester Playhouse, Mulgrave Road, Factory, and The Savoy Theatre.

“After almost 20 years, I’m excited and honoured to be returning as host of the ECMA Gala this year with fellow Cape Bretoner, Ashley MacIsaac. I’m looking forward to getting up to a little trouble with him,” says Rankin. “The ECMA has played a significant role in fostering East Coast musicians of all genres for almost three decades now, providing a platform for up and coming performers to showcase their talent while honouring those who have achieved success here and outside the region. The Rankin Family was no exception.”

"ECMA is thrilled to be heading back to Cape Breton for ECMW. We've already seen incredible enthusiasm from the Sydney community, and we're confident next year's event will be the best ECMW yet," says Andy McLean, ECMA Executive Director. "Last year's decision to hold the Awards Gala on Thursday was very positively received, so we look forward to kicking off the 2016 event in the same way. Having Ashley MacIsaac and Heather Rankin - two legendary Cape Breton performers - co-host the Gala is the perfect way to launch ECMW 2016."

Special Awards Gala tables will also be available for sale. If you are interested please contact Andree Gracie at sponsorshipmanager@ecma.com.

Performers for the Awards Gala will be announced soon.

"I am very excited to be taking part in this fantastic week in Sydney. We look forward to working with staff and the community of Sydney to deliver an exceptional event," says Dean Stairs, new Chair of the ECMA Board of Directors. "East Coast Music Week is a celebration of diverse and exceptional talent within the creative and dynamic music industry. Cape Breton is no stranger to celebrating and promoting its rich culture and heritage."

The East Coast Music Association (ECMA) is a regional collaboration of people in the music industry of Atlantic Canada that fosters, develops and celebrates East Coast music and its artists locally, regionally, nationally and internationally. The ECMA annually produces one of the top music industry events in Canada, Eastlink East Coast Music Week, which includes Awards, a Festival, an Industry Conference and the International Export Buyers Program. ECMA and its programs are generously funded by the Government of Canada through the International Business Development Agreement (represented by Atlantic Canada Opportunities Agency, Foreign Affairs and International Trade Canada, and Industry Canada), the Department of Canadian Heritage (Canada Music Fund), the four provincial governments in Atlantic Canada, the Department of Foreign Affairs and International Trade, and MUSICACTION. ECMA recognizes the support of the province of Nova Scotia, the Cape Breton Regional Municipality, ECMW Title Sponsor Eastlink, Nova Scotia Provincial Lotteries and Casino Corporation, The Membertou Trade and Convention Centre, Gold Partners Molson Canadian, NewCap Radio, and The Cape Breton Post.

This project is funded in part by FACTOR, the Government of Canada and Canada’s private radio broadcasters.