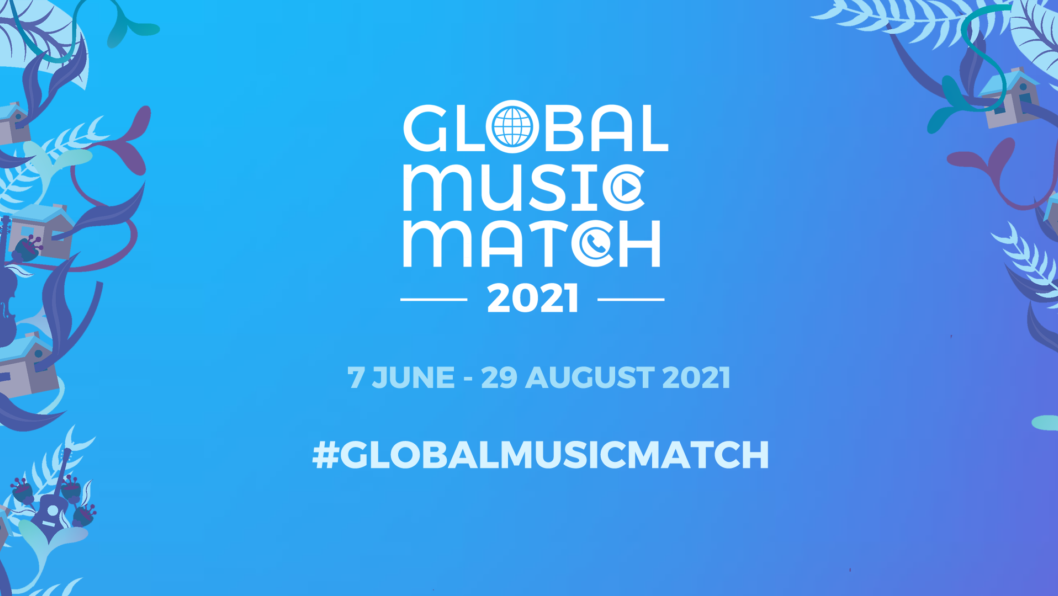 The East Coast Music Association (ECMA) is extremely excited to participate in the second edition of Global Music Match and is pleased to announce the ECMA Team Canada line-up of superb artists from Atlantic Canada.

Seven ECMA artists and groups have been chosen to participate in Global Music Match 2021 including, the Kubasonics, Émilie Landry, Terra Spencer, Pretty Archie, Jessica Pearson and The East Wind, Quote The Raven, and Andrew Waite.

Also joining in this edition is the Canadian Independent Music Association (CIMA) and six fantastic acts from across the country: Amy Nelson, Buckman, Krista Hartman, Lynne Hanson, Sonia Aimy and Stephen Fearing. Festival producer Doug Cox (Vancouver Island Music Fest) will act as a Canadian coach working with his team of artists alongside a strong network of influential festival directors and publicity experts from around the world.

This year’s iteration follows 2020’s world-first collaboration, which was created by founding partners Sounds Australia, Showcase Scotland Expo and Canada’s East Coast Music Association (ECMA) in a bid to continue developing profiles for artists in international music markets within the challenging and unprecedented parameters of COVID-19.

Artists from around the world have been grouped into teams of six, from different countries, and over the coming 12 weeks will collaborate with each other across their social media channels. Each act will be presented as a spotlight ‘Feature Artist’ by their team-mates over a two-week period introducing them to new audiences and markets around the globe.

With 78 artists, 13 teams of six will operate simultaneously, across borders, countries and timezones, introducing audiences to three months of new music, whilst artists largely remain unable to tour internationally.

Born out of the COVID-19 pandemic, and created as a unique and direct response to the sudden limitations imposed on the worldwide music industry - and in particular, international showcasing - Global Music Match seeks to enhance and develop artists’ international fanbases, presence and peer connections in global markets. The tremendous success of the 2020 pilot edition has established lifelong working partnerships, market development, enhanced international networks, and collaborations across the globe - all during the most challenging year the live music industry has ever known.

“Being involved in Global Music Match was a game changer for me. It introduced me to other musicians from around the globe and their fans, their team and their music associations. The invaluable insight into how different countries use different social media, digital and terrestrial radio, print media, digital media, and in general just learning a different way to do things was incredible. The team grew stronger week by week and long lasting friendships were forged. Another incredible thing for me personally was the ability to discover new artists so much so that on June 7th I have a new single coming out with Svavar Knútur from Iceland. Svavar was in a different team but I reached out and off we went. All in all I can’t stress the importance of being involved with GMM.” - Irish Mythen

"Global Music Match was a once in a lifetime experience that could not have happened at a better time. In a year where the idea of being a touring musician seemed so far away, GMM connected me with musicians from around the globe. The inspiration gained both personally and professionally throughout the process, as well as the lifelong friendships and touring opportunities created, will play a defining role in the next chapter of my career. I would do it again in a heartbeat." - Adyn Townes

Global Music Match 2020 ran throughout August to October 2020, and officially wrapped with a four-hour showcase of the project and its collaborations at Folk Unlocked, the acclaimed digital edition of the Folk Alliance International (USA) conference in February 2021. On top of the strategic aims central to Global Music Match, February’s Global Music Marathon illustrates just one example of the international music industry taking serious note of the project - as well as the calibre and export-readiness of participating artists - presenting them to hundreds of leading buyers, bookers, programmers and presenters at the world’s largest folk-based music conference.

ECMA CEO, Andy McLean said: “ECMA is wholeheartedly in support of the 2nd version of Global Music Match for 2021. As one of the three founding organisers, we saw the massive positive impact the 2020 program had for artists worldwide who were facing the unprecedented challenges of a global pandemic. It was so exciting to witness how quickly the international music community came together forging new and lasting relationships. We are eagerly anticipating seeing the creative ways artists will collaborate this time around. Congratulations to everyone involved for their hard work and commitment to keeping the music flowing across international landscapes.”

Showcase Scotland Expo Executive Producer, Lisa Whytock said: “We’re really excited to see Global Music Match kick off again next week. The idea came about on a Zoom call between myself and Millie Millgate of Sounds Australia early on in the pandemic last year, and we have since seen it grow to include so many export organisations and artists - all of whom continue to amaze us with their positive outlook and enthusiasm for the opportunities it presents.

“Over the last year, everyone has been connecting through social media - yet Global Music Match really harnesses the power of collective markets, and ultimately the goodwill and supporting nature of the worldwide music community. We are really looking forward to seeing how all the artists work together this time round. With so many from around the world, most of the musicians won’t have met in person - let alone toured in their respective countries - so once again it really is going to establish new and lasting international connections.”

For further information, head to www.globalmusicmatch.com, or search for the hashtag #GlobalMusicMatch to check out the worldwide introductions to new artists. 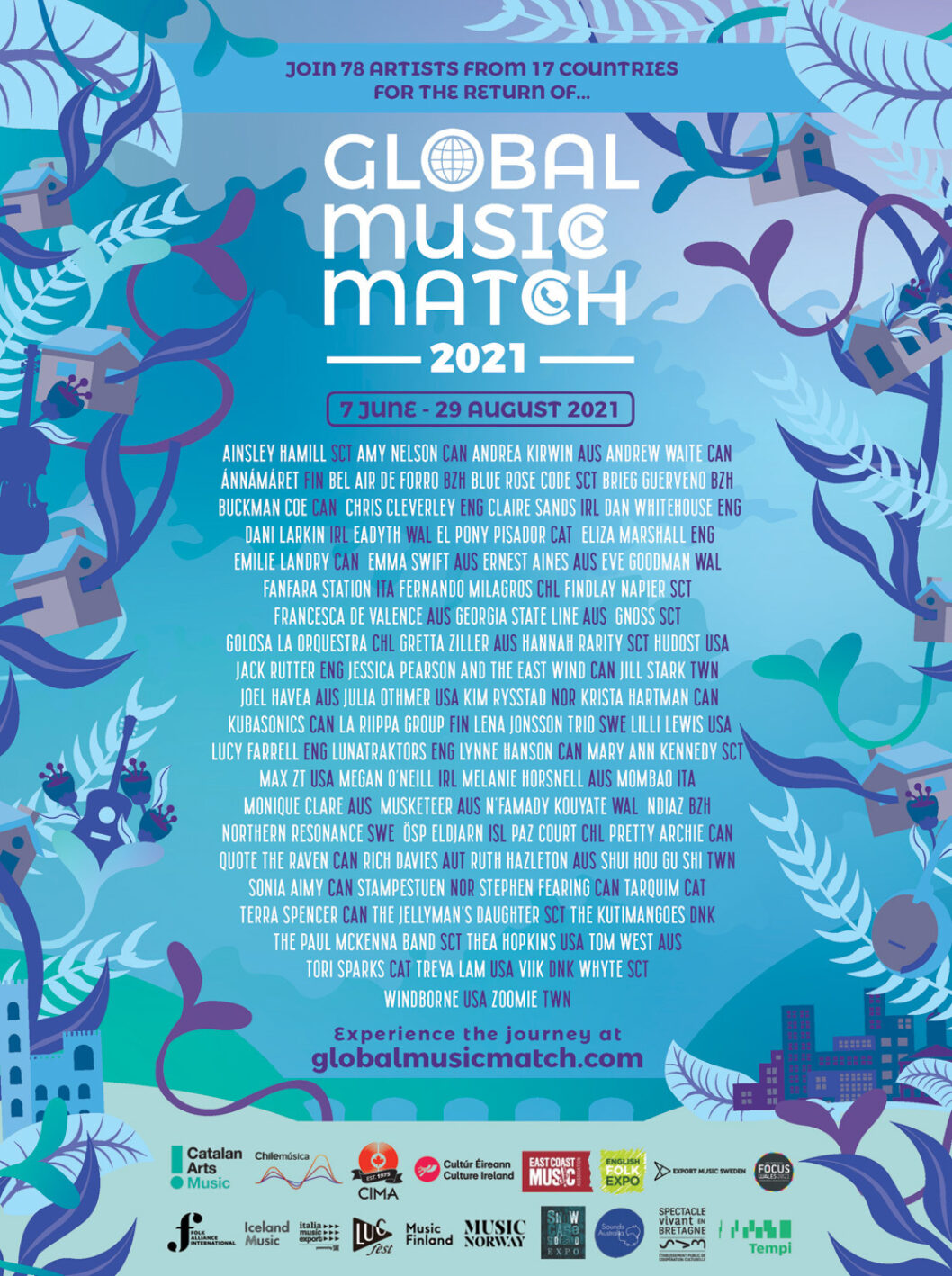